Someone emailed me the other day and asked me who I thought the greatest Hollywood bartender of all time was, and seeing as I have chosen to unearth and report all things bar-related in the industry (and perhaps occasionally outside the industry), I decided to do better than simply name the single greatest silver screen bartender, and rank, categorize and index the greatest ten.

What I found disappointed the shit out of me.  Of the ten listed, only two of them show any evidence of ever getting laid.  These are bartenders, for Christ’s sake!

Even so, after 18 hours of deliberation and shaking my head in disgust, here is my list for greatest television and movie bartenders of all time.  At the end, I would love to hear your opinions, but please don’t tell me that Jackie Gleason or the guy from A Wonderful Life belong on this list or I will have to bang my head on my keyboard for the next six hours.  Those characters only had sex to procreate and I’m not having it.  Here’s how I see it:

#10  Danny Trejo as Razor Charlie  in From Dusk Till Dawn

Not a big role, but anytime a bartender turns into a vampire, you have to put him in the top ten list or he might climb through my window at 4:00 a.m. and t-bone my neck.  Trejo was also the bartender in one of my other favorites, Anchorman, which must also be mentioned simply because it’s one of  my favorite scenes in the movie:

Trejo: “You know, times are changing. Ladies can do stuff now. And you’re gonna have to learn how to deal with that.”

Ron: “What? Were you saying something? Look, I don’t speak Spanish.”

#9  Joe Turkel as Lloyd in The Shining

I gotta be honest, if I was forced to choose who to go one-on-one with in a dark closet, I’d take on Razor Charlie the vampire any day before I mess with Lloyd.

He is flat out SHUDDERSOME!  That deadpan face and his calm, polite replies are dead giveaways to a dark satanic power you don’t want to fuck with.

There’s something about calm people that scare the shit out of me, because it always seems like they know something that I don’t, something dreadfully bad that has to do with me.  There’s little doubt in my mind that Lloyd could reach over the bar and separate your chest plate to extract your heart anytime he wants to  (shiver).

#8  Frank Santorelli as Georgie the Bartender in The Sopranos

Georgie is the mafia’s personal bartender at the Bada Bing and could be the older brother of Lenny from Of Mice and Men.  Though not quite as dimwitted, Georgie is amiable and harmless but the mis-timed comments that come out of his mouth are a trigger for Tony to beat the tar out of him with nearby objects:  phones, ice trays, cash registers, chains, you name it.

Georgie is a pee-on and doesn’t really represent us very well as bartenders, but he is on one of the most popular series of all time, so he makes the list.

#7  Cheech Marin as the Short Bartender in Desperado

This is one of my favorite bartender scenes ever and my second favorite role by Cheech since he and Chong did Things are Tough All Over.  Cheech and Steve Buscemi get involved in a conversation that includes an entertaining, if not drawn out joke, from Buscemi as well as his witnessing the Mariachi’s murderous rampage at a previous bar.

Cheech, who at first regards Buscemi’s character with the same respect as a cockroach, suddenly gets very interested.

Buscemi:  No, man.  Bartender got it worse than anybody.

No amount of weed could save the short bartender, and he soon suffers the same fate.

#6  Ted Lange as Isaac Washington on The Love Boat 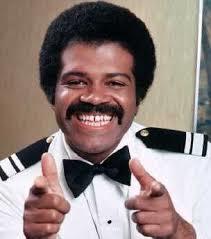 Isaac basically makes the rest of us bartenders look like a bunch of pricks. He smiles enough to make you think that he’s winning an Oscar every second of his life.  If he were a dog, he’d be a labrador, jumping on your lap and licking your face.

You might call him cheesy, but this extremely benevolent bartender from The Love Boat whipped up Pina Coladas and Mai Tais while solving all of the passengers’ problems in a single hour.  Though we know that Isaac isn’t one of the two bartenders on the list getting laid, when you think of great television bartenders, you gotta think of Isaac.

Matt Damon as Jason Bourne in The Bourne Identity

Yeah, shut up, I know he’s not a bartender, but he’s Jason Bourne!  He gets to be on any top 10 list he wants.

I know, he’s a turd, and though many think that Tom Cruise and rabies are kin, Cocktail did for flare bartending what Rounders did for Texas Hold ’em.

In the movie Brian Flanagan drops out of college to start bartending and with the help of his mentor, Doug Coughlin, Flanagan is spinning bottles like a Vegas veteran after about 7 minutes of training.

The movie is typical 80’s which means it’s awkward to even watch again, but the flipping bottle scene in the movie is totally tubular and lands a place for Cruise in the top 5 of this list.  Plus, he is one of the two bartenders on the list getting down with the ladies.

With the exception of #1 on this list there probably isn’t a more entertaining character on television than Woody Boyd.  There isn’t nearly enough room on this post to even try and express the belly laughs Woody gave me throughout the years.

The naive hick from Hanover, Indiana (voted smartest in his class) never met a conversation that wasn’t over his head.  All jokes, concepts and direct orders are misunderstood on a massive scale, which only contributes to his persona as “most lovable bartender ever”.

Woody once wrote a song for his girlfriend, Kelly, in which her name constitutes 90% of the lyrics.

Sam:  Is it me or is that woman gorgeous.

Woody:  You look nice, Sam but I’d have to go with the woman.

Oh, Sammy!  With a black book containing more names than there are words in the dictionary, you are to be worshipped and revered like the womanizing man-beast you are.

Sam, of course, is the other bartender on this list getting laid.  A LOT!  Sam is funny, athletic, a great bartender, and a ladies man worth his weight in gold (I resemble 3 of these 4 qualities; don’t ask me which one I’m not).

#2 Moe Szyslack on The Simpsons

My wife said to me, “How can you list Moe so high in your rankings? He’s a cartoon.”  Are you kidding me?  How can you NOT?  He wields a shotgun behind the bar and wears an extension cord for a belt.

Moe’s character is so complex I probably need an entire post just about him.  Moe’s gargoyle-like features give all ugly people a glimmer of hope at ever becoming a bartender in this industry.

Despite his bar being in constant threat of going under, Moe always seems to have something in the works, usually shady and illegal, such as running a casino and a speakeasy, keeping African bees in his back room, smuggling pandas, hosting Russian roulette games and serving liquor even though his license expired in 1973 and is only valid in Rhode Island.

The comedy is endless and brilliant, and his incompetence as a bartender and business owner creates enough hilarity to push Moe all the way to #2 on the list.

Best Moe quote:  (At the drive-thru with a date) I’m not cheap baby. I’m embarrassed to be seen with you. There’s a big difference.

And the winner is…

That’s right, Al “Fuck, Shit, C-Word” Swearengen of Deadwood.  Nobody can match the brains, wit or brutal verbal and physical bashings that this guy can administer.

Tony Soprano is a titanic pussy compared to Al.  His name says it all, because Swear-engen curses more than Courtney Love who curses more than Al Pacino in Scarface, and that’s a fuckload. The worst part of the show is when Swearengen gets a kidney stone and almost dies.

He can’t speak for three episodes and I thought I might stab myself in the neck if I had to watch one more minute without that gorgeous mouth of his tearing new assholes faster than a stop sign goes up in America.

The show itself is decent, but Swearengen makes it more awesome than Jedi knights with lasers on their heads.  I love you, Al! Congrats on your number one TheRealBarman ranking.  Fuck yeah, motherfuckers!

Best Al Swearengen quote:  God rest the souls of that poor family… and pussy’s half price for the next 15 minutes.

P.S.  I lied, Swearengen also gets laid, but it’s such filthy (literally) sex and since it’s from his own prostitutes, it hardly counts.

HONORABLE MENTIONS:  People who made a dent, but not the A-list

Jim and Mike from the Regal Beagle on Threes Company – Any bar that has Jack Tripper drinking there while juggling sexual misunderstandings with redheads, blondes and his two female roommates, gets both Jim and Mike a mention here.

The girls from Coyote Ugly – Why did the girls from this god-awful film make the list, you ask?  They’re chicks dressed in skirts the size of dinner napkins. Duh!

Nicholas Colasanto as Eanie “Coach” Pantusso on Cheers – An elderly version of Woody.  They were both great, but there’s only room for one dipshit bartender on the list.

Glenn Strange as Sam Noonan in Gunsmoke – He was on a show as a bartender way too long not to get mentioned here.  Plus he carried a rifle behind the bar.

Bryan Brown as Doug Coughlin in Cocktail – Brian Flanagan’s mentor.  I just loved the way he said “Cocktails and Dreams” in his cool British accent.