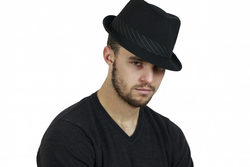 The following discussion is an exchange I had with a guest years ago as a bartender. I have revived this conversation for anyone who is still not quite sure how capitalism or the transaction of money works in bars, as well as for anyone who likes the band Nickelback, as I assume you have some sort of learning disability.

In order to fully understand the situation, we must have a set of ground rules. Here is a reminder of what bars are not: Bars are not yard sales. Bars are not auctions where you can raise up a little numbered sign on a stick to bid for drinks. Bars are not J.C. Penny’s or Target that have year-end clearance sales. Despite what the dishonest bartenders of the world might lead you to believe, drinks are non-negotiable, at least not in places that are trying to earn a profit.

I want you to fully understand the situation because I know I can sound like a dick sometimes, but if you had any idea how tiresome it is to have people ask to be hooked up or to make their drink strong, you’d sympathize with my sarcastic exchange.

This particular conversation involved a 22-year old cool guy with the tan, dark skin of a lacquered coffee table. Apparently his goal was to show off his negotiating skills to the two girls he walked in with, and I’ll readily admit that I don’t think I did my part in helping him get laid that night, but when you walk out of the house wearing a V-neck t-shirt with the V dipping low enough to reveal your man cleavage and a fedora on your head like Tom Landry of the Dallas Cowboys used to wear, I’m sorry to say you’ve wandered into your own quicksand. A merciless, douche-swallowing, no-sex-for-you quicksand.

Cool Guy:  What’s up, Boss? Do you have any specials tonight?

Me:  You bet, the sea bass is excellent.

Me:  Sure, how about a Blackberry Caipirinha with fresh blackberries, muddled limes and Leblon Cachaca.

Cool Guy:  How much is that?

Me:  How can you possibly get more special than a Blackberry Caipirinha?

Cool Guy:  By not selling them for ten bucks.  I’m asking if you have any deals.  I’m a really good tipper. Can you hook me up?

Me:  Well, disregarding the fact that you left me fifty cents for the three Jack and Cokes you ordered the last time you were here, I would be delighted to “hook you up” based on fabricated promises of future and possibly gargantuan tips you may or may not leave on the bar in the form of nickels and dimes.

Cool Guy:  What are you talking about?  That wasn’t me.  I used to bartend, bro.

Cool Guy:  Very funny.  Come on, you gotta have something.  Two for one on beers maybe?

Me:  Ohhhhh, I get it.  You believe you’ve stumbled upon a yard sale, where you can bargain for used items, like old books and shabby knick-knacks.

Me:  Well, there’s this half of a Coors Light left in the bottle that this guy didn’t drink.  You can have the rest of it for $2.

Cool Guy:  You don’t have to be a dick head. I just thought we could help each other out, you know?

Me: Absolutely! I love helping people. What can I help you with?

Cool Guy:  (Rolling eyes) I’ll have a Jack and Coke, but make the Coke light, if you know what I mean.

Me:  Got it.  One Jack and Diet Coke coming up.

Cool Guy:  No, not light like that.  I mean make it strong.

Cool Guy:  NO! I mean, make it strong but I don’t want to pay for a double. Jesus!

Me:  Pardon my ignorance.  NOW I understand.  You want me to steal liquor from the owners of this place and move it at a cheaper price so that you can save some money and I can risk losing my job and sacrifice my integrity.

Cool Guy:  Give me a break.  Bartenders do it all the time.

Me:  I see.  So you’re suggesting that I should become a conformist?

Me:  Have you ever heard of Hitler’s army?

Cool Guy:  I have no idea what the fuck you’re talking about.  I’m just sayin’, you know how it works.  You hook me up, I hook you up.

Me:  That sounds like quite a visionary system you’ve invented, and despite the life-changing possibilities that your fifty cents could provide for me and my family, for the time being I’m going to have to regretfully decline restructuring the fixed price arrangements that have been established here.

Cool Guy:  Forget it.  We’ll go to another bar.

Me: (To the back of his head as he walks out): Come back next weekend for our Marin Luther King extravaganza.  Buy 3 Jack & Cokes and get fifty cents off a Blackberry Caipirinha.